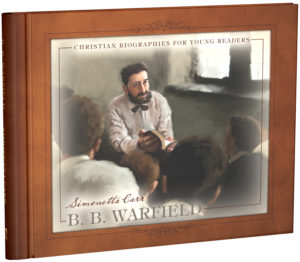 B. Warfield lived at a time when many people—even those who considered themselves Christians—were questioning the authority of God’s Word. For centuries most people in Europe and North America had taken for granted that the Bible was the word of God, but in Warfield’s lifetime they were wondering whether it could still be trusted. Warfield was confident that the Bible could be trusted, and as a professor of theology at Princeton Seminary, he devoted his life to teaching and writing about its authority and other important issues of theology. In this biography, Simonetta Carr introduces children to one of America’s greatest Reformed theologians whose timeless writings address challenges to the truths of God’s Word today.

“Benjamin Breckinridge Warfield is often called the ‘Lion of Princeton’ because of the ferocity with which he pounced on any departure from his beloved Reformed faith. But in addition to being a highly respected biblical scholar and theologian, the ‘Lion’ was also a devoted husband and a true scholar-gentleman. Warfield lived and worked in tumultuous times. There is much to learn from both his work and his exemplary life.”

—Kim Riddlebarger, senior pastor of Christ Reformed Church in Anaheim, California, and author of The Lion of Princeton: B.B. Warfield as Apologist and Theologian

“Warfield was a champion of the faith whose legacy deserves to be kept alive. I am grateful that at last, thanks to Simonetta Carr, our children will become acquainted with him also!”

—Fred G. Zaspel, pastor of Reformed Baptist Church, Franconia, Pennsylvania, and author of The Theology of B. B. Warfield and Warfield on the Christian Life