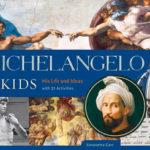 Michelangelo Buonarroti—known simply as Michelangelo—has been called the greatest artist who has ever lived. His impressive masterpieces astonished his contemporaries and remain some of today’s most famous artworks. Young readers will come to know Michelangelo the man as well as the artistic giant, following his life from his childhood in rural Italy to his emergence as a rather egotistical teenager to a humble and caring old man. They’ll learn that he did exhausting, back-breaking labor to create his art yet worked well, even with humor, with others in the stone quarry and in his workshop.Michelangelo for Kids offers an in-depth look at his life, ideas, and accomplishments, while providing a fascinating view of the Italian Renaissance and how it shaped and affected his work.

Budding artists will come to appreciate Michelangelo’s techniques and understand exactly what made his work so great. Twenty-one creative, fun, hands-on activities illuminate Michelangelo’s various artistic mediums as well as the era in which he lived. Kids can: make homemade paint, learn the cross-hatching technique used by Michelangelo, make an antique statue, build a model fortification, compose a Renaissance-style poem, and much more.

KIRKUS Review – This substantial biography of the life and times of the great sculptor, painter, poet, and Renaissance man Michelangelo Buonarroti describes its subject’s life in eight chapters. Following his birth and childhood, his life in Rome, Florence and Bologna, his complicated and often fractious relationships with his patrons–from the early Medicis and the Florentine guilds to the popes–and Michelangelo’s connections with other artists are described in leisurely detail. Works that no longer survive, as well as those that are well-known today, including the Pietá, the statue of David, the Sistine ceiling, among others, are described and placed in the context of their times. The book’s three-column horizontal format lends itself well to illustration, with photos of relevant present-day sites as well as key works by the artist. The text is dense, full of anecdotal material, and clearly at a relatively advanced reading level, so the assumption must be that it will be used primarily by teachers and parents as source material. The 21 illustrated activities, consisting mostly of crafts such as homemade paint, soap sculpture, and how to draw to scale, are at a much lower level than the main text and would be satisfying only for very young children. A helpful timeline is included. Back matter includes a glossary, key figures, resources, notes, and bibliography. Like many others in the …For Kids series, stronger for its content than the promised activities but worth it nevertheless. (Biography. 9-14)

School Library Journal – Architect, sculptor, painter, engineer, teacher/mentor, poet, genius—Michelangelo Buonarroti was all these and more. This intelligently written, comprehensive, and fascinating account of the Renaissance icon’s life, art, personal and professional relationships, and prickly personality and the ways in which he navigated the religious and political upheavals of his time are handled smoothly and with sophisticated language. The volume is as much a history of mid-16th-century Italy as it is about the artist; indeed, this book demonstrates that it would be difficult to understand Michelangelo and his output without background knowledge of the era in which he lived and worked and the influences that shaped his ideas. Many examples of the artist’s works and contemporary graphics grace the book in four-color, and excerpts from his poetry will help familiarize readers with his literary output as well. Overall, the activities are easy and enlightening (though geared to younger students), offering insight into the artist’s methods and techniques; they require only simple, readily obtainable supplies. An Italian pronunciation sidebar in the opening chapter; a list of key figures mentioned in the text and their dates (minus a pronunciation guide, which would have been most valuable here); videos; and resources are included. VERDICT A welcome asset in public and school collections; use in units on art and Renaissance history and where biographies of Michelangelo are in demand.–Carol Goldman, Queens Library, NY (Grades 5-8).

Booklist – To understand the term Renaissance man, one need only read this biography of Michelangelo. It begins with a look at his formative years, being born to a noble (yet not wealthy) Florentine family, his early talent for great art–and the ego that went with it. The focus, however, is on Michelangelo’s masterpieces. Although Michelangelo considered himself foremost a sculptor, as seen in his David and Pietà statues, the author explains how he blended his innovations in engineering, optical illusions, color, and light into paintings, such as the ceiling of the Sistine Chapel, and architecture, such as the dome on Saint Peter’s Basilica. Michelangelo’s art even carried into the written word through poetry. These achievements are all set against the political turmoil and religious change and controversies of the time, highlighting the artist’s professional and personal challenges. Also lending an understanding of the Italian Renaissance and Michelangelo’s techniques are sidebars, color photographs, and 21 engaging activities. Although the activities sway younger than the denser text, there’s something to learn about Michelangelo across all ages. — Angela Leeper, Booklist

“Thank you for  your  Michelangelo book. It is very handsome and I must say that an engaged 9 year -old can certainly learn a lot from it. I especially like the interactive feature. A modern Michelangelo may lurk among your readers.” Paul Barolsky, Commonwealth Professor in the McIntire Department of Art at the University of Virginia, and author of several books, including Michelangelo’s Nose, Michelangelo and the Finger of God, and The Faun in the Garden.

“I just received your book and it is a remarkable achievement.  I really had no idea it was so diverse and uniquely conceived. I’m very impressed and you should be most proud of what you have produced.” Victor Coonin, Ph.D., The James F. Ruffin Professor of Art History, Rhodes College Art Department, author of From Marble to Flesh: The Biography of Michelangelo’s David.

“Just back from Italy to discover your utterly delightful and charming Michelangelo for Kids.  How I wish my two were still of an age…alas, they are both approaching 30, but they too will be charmed by this marvelous, colorful and fun book.  It is very creative and imaginative.” William Wallace, Barbara Murphy Bryant Distinguished Professor of Art History and Director of Undergraduate Studies, Washington University in St. Louis, author of several books, including Michelangelo, the Artist, the Man, and His Times.

I am deeply indebted to Dr. William E. Wallace: Barbara Murphy Bryant, Distinguished Professor of Art History at Columbia University and author of several books, lectures, and articles on Michelangelo; to Dr. John T. Spike, Distinguished Scholar in Residence at the College of William and Mary in Williamsburg, Virginia, and author of Young Michelangelo: The Path to the Sistine; and to Victor Coonin, James F. Ruffin Professor of Art History at Rhodes College and author of From Marble to Flesh: The Biography of Michelangelo’s David for answering my frequent questions. Dr. Spike and Prof. Coonin have also read one of my chapters and have offered valuable insights. I am also grateful to Dr.. Antonio Forcellino, Art Restorer and author of Michelangelo: A Tormented Life, who has kindly taken the time to read my full manuscript and answer my questions.
I couldn’t have done without the help of many families who have tested the activities in this book with children of many ages: the Richards, the Plotners, the Sanchezes, the Van Bibbers, and the Pisanis. At times, I felt we were all sitting at one big table having fun together. While simple in nature, the activities can be easily adapted to older students.
Page load link
Go to Top