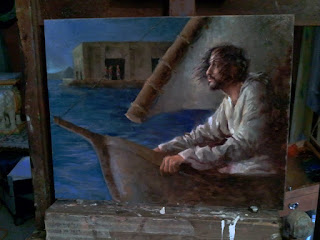 Matt is now working on the first illustration for my book on Athanasius, and we are discussing physical features. We don’t have many documents to help us with our decision. All paintings and orthodox icons portraying Athanasius were made many centuries later.
There is the common nickname of “black dwarf.” I was puzzled when I first found it, because I could not read this description in any original documents. Something else was strange. When I tried the search in other languages (“nano nero” or “nain noir”) I couldn’t find any results. I asked an Italian expert on that particular time period and on the early Fathers, and he had never heard of it.
Finally I found this site http://www.conorpdowling.com/803/chasing-the-black-dwarf with some explanations.
The fact that Emperor Julian had called Athanasius “a little man” does not necessarily mean that he was physically short, and apparently 20th-century American writers called him black just because he was African. I was later told by an African-American activist that the term “black” in America has a very wide meaning that goes beyond skin color. So an Egyptian could be called black just because he is African, and that could explain the “black dwarf” nickname.
I know this is a debatable subject and I am not interested in starting a discussion here. I just want to solve a practical problem: what did Athanasius look like?
We know that he lived in Egypt. His name is Greek, so he could have even come from a Greek family, which would make him Mediterranean but not dark. To avoid supposition, we can make him look as a typical 4th-century Egyptian. One of the best guidelines in this respect is the Fayum collection of portraits dated about the same time (1st-3rd century A.D.)
According to Philip Schaff (A Select Library of Nicene and Post-Nicene Fathers of the Christian Church), “later tradition adds a slight stoop, a hooked nose and small mouth, a short beard spreading into large whiskers, and light auburn hair.” This is, however, just tradition and not an accurate first-hand description.
I will let Matt decide what to do. His guess is as good as mine, and he is the artist. This post is
just an explanation to anyone who might ask me later why our Athanasius looks like he does