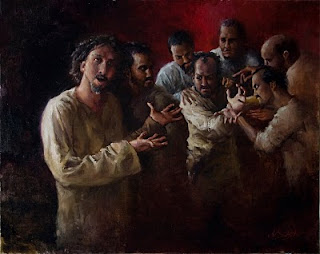 Matt (Abraxas) is outdoing himself. His illustrations of my book on Athanasius are the best yet. Here is his interpretation of Athanasius’ trial in Tyre, where he had to answer to a charge of murder (among other accusations).
My daughter said, “It’s evil.”
“The men’s faces, right?”
“The red color in the back.”
Normally, my books are pretty sedate in tone, trying to express as much objectivity as possible, but while a biographer can be sedate, a novelist and an illustrator can’t. The biographer can lay out the facts, but novelists and illustrators must necessarily tell a story, imagining emotions when they are not told.
Modern biographers tell us that some of the accusations brought up against Athanasius at the council of Tyre might have been founded. His election might have been out of order. He might have been too young to be a bishop, and he might have condoned some acts of violence. We can switch to any political channel today and feel just as confused. We don’t know all the facts.
But we have this one scene. On one hand, Athanasius, a very young and energetic bishop, who had lived his childhood during the greatest persecution of Christians of all times and had been trained by one of the staunchest defenders of the full divinity of Christ in a cosmopolitan, highly cultural, and theologically divided city. On the other hand, we see those who disliked him – Arians and Meletians alike. As charitable as we can be toward those groups (after all, most heretics and schismatics truly believe to be working for the truth and the good of the people), in this particular situation their accusation was absolutely false, and anyone who hides a man and produces a severed hand to prove his murder deserves a red backdrop!
So Athanasius looks at us in the picture. (I love how Matt does this, he did it in the illustration on the cover of John Owen, where the little girl looks at us straight in the eye). He looks at us and explains. These are angry men. There is tension and contention. Their accusation was unfounded and he has proved it. There is a little hint of confidence on his face. He is asking but hoping we’ll agree with him.
There it is – my interpretation of Matt’s interpretation of the facts…